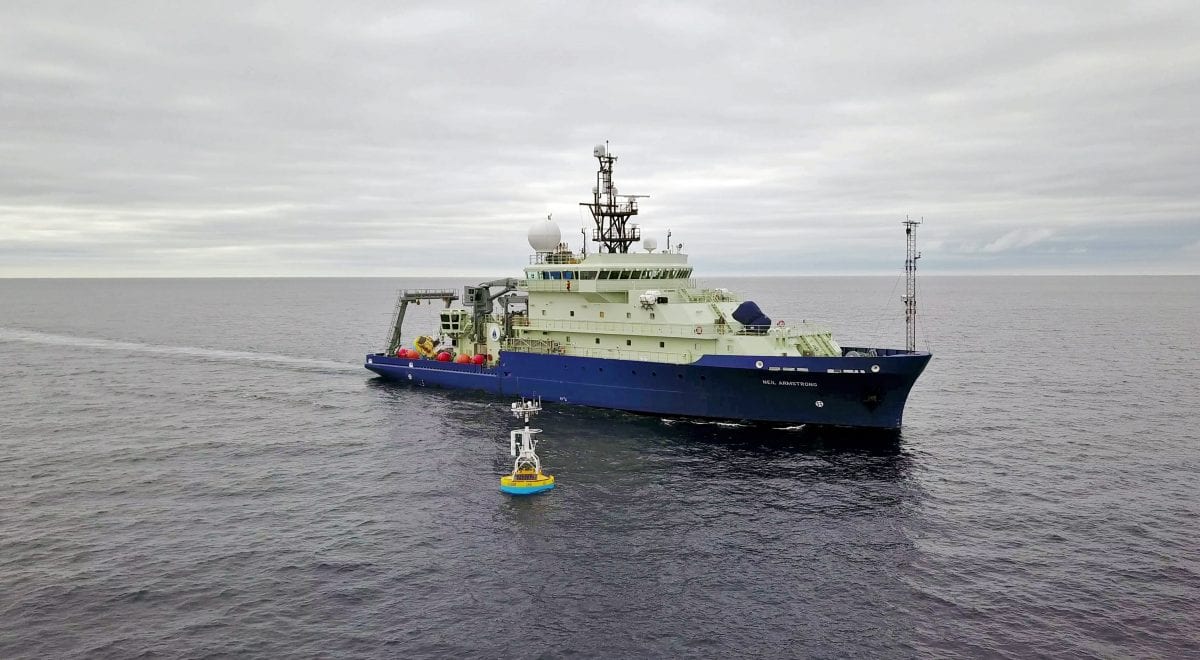 Researchers at Woods Hole Oceanographic Institution (WHOI) were recently awarded a $500,000 grant from the National Oceanic and Atmospheric Administration’s (NOAA) Climate Observations and Monitoring (COM) program to develop machine learning tools to improve estimates of air-sea heat exchange in the Arctic Ocean and adjacent seas. These tools are expected to fill critical gaps in climate models, which currently show large disparities when simulating the rate of polar ice melt.

Recent advances in remote sensing technologies have provided researchers with the data they need to better understand the forces behind Arctic ice melt and the implications of that heat exchange between the ocean and the atmosphere. These real-world measurements will allow researchers to develop machine learning algorithms that will validate and improve satellite-based modeling of the Arctic and subarctic regions.

Lisan Yu, a WHOI senior scientist and the project’s principal investigator, said a machine learning-based framework will improve the accuracy of ocean-surface forcing estimates used to model the global climate. She said it will also improve the accuracy of ice and weather forecasts in a region that is rapidly opening up to commercial exploration.

“Arctic surface air temperature is rising twice as fast as the rest of the world, and its sea ice is retreating up to three times faster than the rate projected by climate model simulations,” said Yu. “The significant underestimate of Arctic sea-ice-loss in models underscores critical gaps in knowledge concerning interactions between the atmosphere, the polar ocean, and ice-covered regions. This project brings all available observations together in a consistent and comprehensive manner to help models make accurate predictions, which are vital for the development of effective policy responses to climate change.”

Due to the difficulty of accessing the Arctic Ocean—especially during the stormy winter months—and the complexity of measuring air-sea heat exchanges, there has previously not been enough quality data to incorporate ice melt and seasonal changes into climate models. This challenge was overcome by recent advances in long-term remote data collection at high latitudes. For the first time in 2019, an Ocean Observatories Initiative (OOI) surface buoy in the Irminger Sea collected over a year’s worth of sensor data, including icy and windy winter conditions. Located in an important area of ocean circulation, the data collected from the OOI surface buoy provides critical verification for satellite-based models. 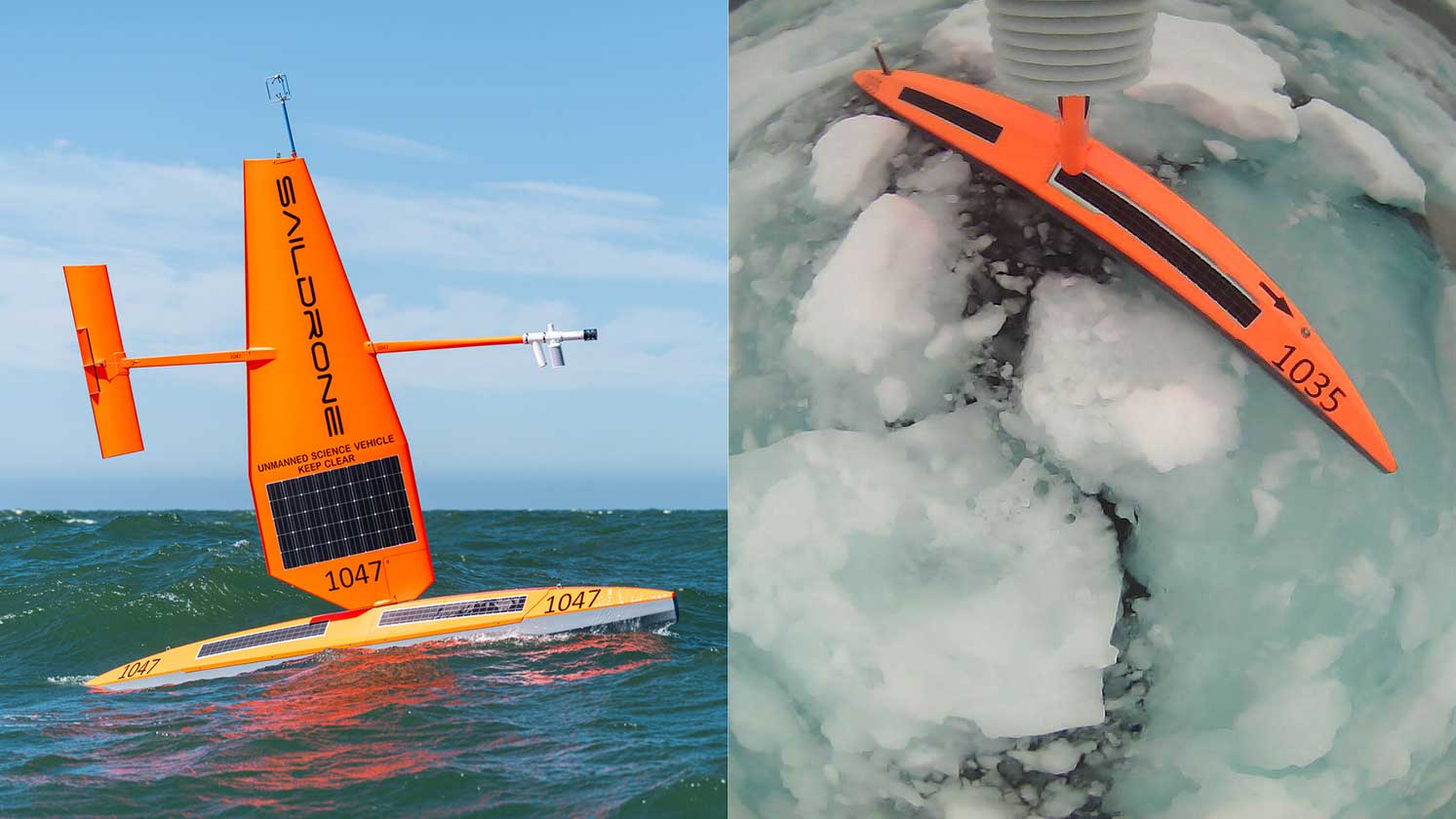 Saildrone unmanned surface vehicles (USVs) will operate in ice-covered parts of the North Atlantic and Arctic Oceans to gather critical information about air-sea interaction in these difficult-to-navigate parts of the ocean in order to improve the accuracy of ice and weather forecasts in the region. Photo courtesy of Saildrone.

The project also benefits from data collected over a wide area of the Arctic by Saildrone. From May to September 2019, six of the company’s wind- and solar-powered unmanned surface vehicles (USVs) surveyed the Chukchi and Bering Seas, gathering data on air and sea conditions right up to the ice edge. In addition, new L-band radiometers on NASA and European Space Agency satellites have improved measurements of air-sea exchanges associated with cloud cover and storms in the Arctic region. The combination of sensors on the OOI surface buoy, saildrone USVs, and satellites will provide the long-term and highly detailed data researchers need to improve estimates of heat exchange between the ocean and atmosphere at high latitudes.

“Given that Arctic observations are extremely limited, we need to extract as much information from them as we possibly can to advance NOAA’s modeling capabilities, such as those for sea ice prediction,” said Virginia Selz, program manager for NOAA’s Climate Program Office COM program. “Dr. Yu's work will leverage the nation's investments in long-term situ and satellite observations, as well as those from new technologies such as Saildrone, and utilize innovative artificial intelligence methods to ultimately help modelers better simulate the rapidly changing Arctic. This project furthers the goals of the COM program, in generating value-add algorithms and datasets to improve climate modeling, and entrains artificial intelligence expertise into NOAA.”

The Woods Hole Oceanographic Institution (WHOI) is a private, non-profit organization on Cape Cod, Massachusetts, dedicated to marine research, engineering, and higher education. Established in 1930, its primary mission is to understand the ocean and its interaction with the Earth as a whole, and to communicate an understanding of the ocean’s role in the changing global environment. WHOI’s pioneering discoveries stem from an ideal combination of science and engineering—one that has made it one of the most trusted and technically advanced leaders in basic and applied ocean research and exploration anywhere. WHOI is known for its multidisciplinary approach, superior ship operations, and unparalleled deep-sea robotics capabilities. We play a leading role in ocean observation, and operate the most extensive suite of data-gathering platforms in the world. Top scientists, engineers, and students collaborate on more than 800 concurrent projects worldwide—both above and below the waves—pushing the boundaries of knowledge and possibility. For more information, please visit www.whoi.edu